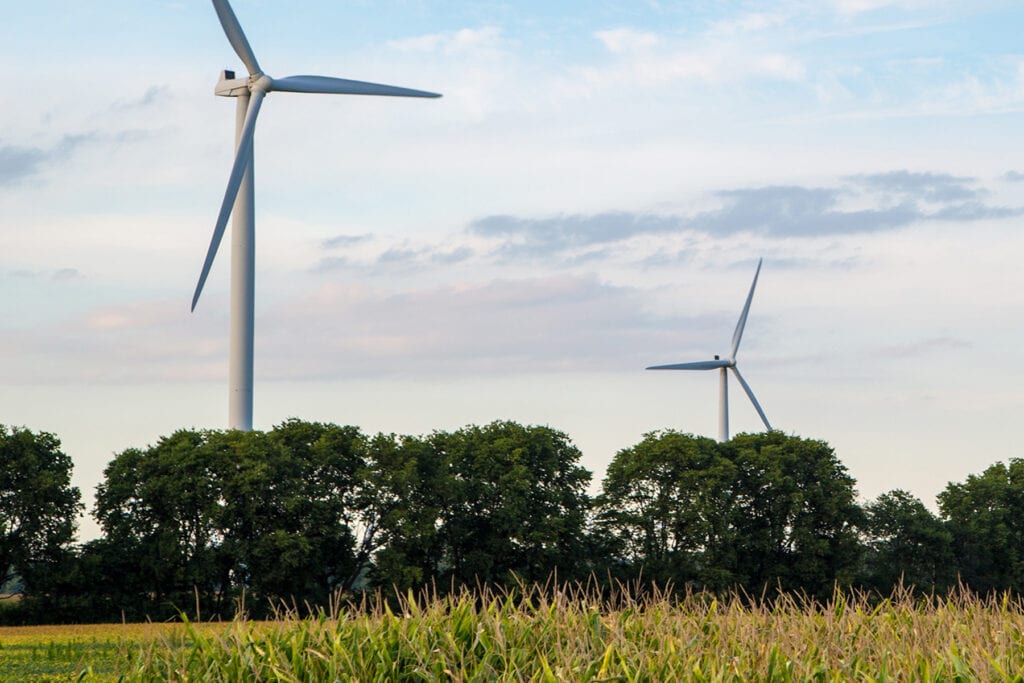 In the hypothetical battle to determine which renewable resource would be best suited for Montcalm County — wind or solar — there’s been little debate.

During the Oct. 28 annual investors meeting of the Montcalm Economic Alliance (MEA), representatives from Ranger Power, a utility-scale solar energy developer in Brooklyn, New York, and Apex Clean Energy, a utility-scale clean energy company in Charlottesville, Virginia, spoke on the subject of projects in development within Montcalm County.

In doing so, Ranger Power estimates an investment, including costs for construction, components and related expenses, of $200 million while Apex is projecting an investment of more than $600 million.

MEA President Rob Spohr was excited to bring both projects to the forefront at the meeting, as each project is expected to generate hundreds of construction jobs and millions in future tax revenues for the county once completed.

“This is not something that is going to replace our existing supply of power,” Spohr noted.

“Some of the old infrastructure will come offline, but each one of these projects are a piece of the puzzle as to what our energy is going to look like in the future. There are people out there who will say, ‘The wind is not always blowing and the sun isn’t always shining,’ and while that’s true, this becomes part of what we’re doing. It’s clean, it’s available and it’s part of an entire portfolio. It’s about becoming better as we move forward.” 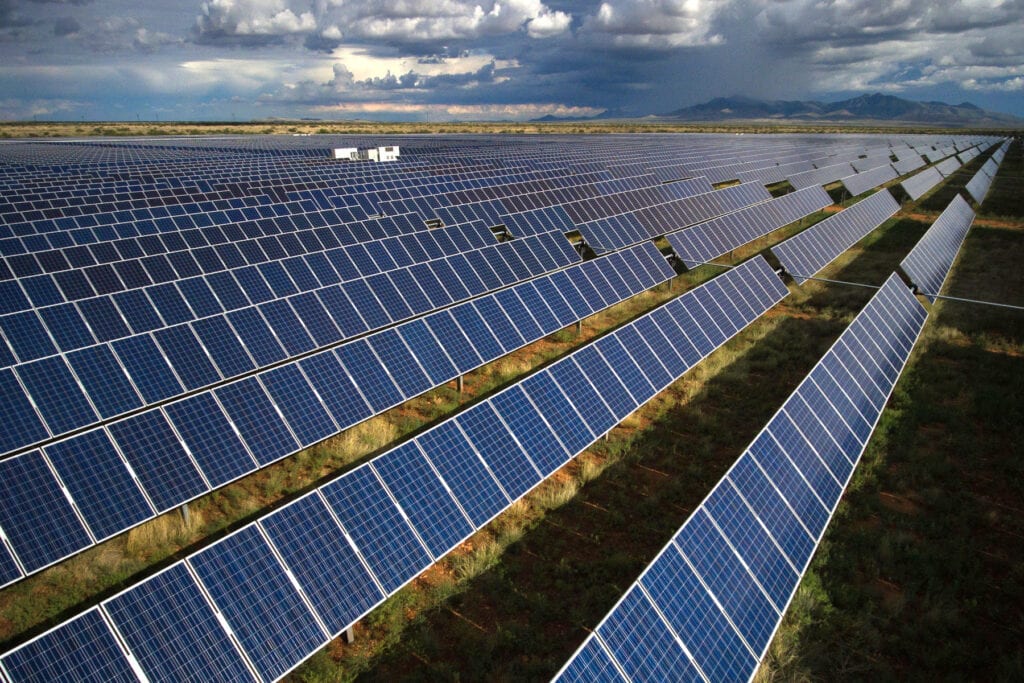 As pictured in this image of a completed Ranger Power solar farm project, the “Freshwater Solar” project proposed to be constructed on about 2,000 acres of privately-owned land in Montcalm County’s Day Township would feature solar panels that would rotate to face the sun, resulting in a 200-megawatt energy farm. The $200 million project is expected to be completed in 2022 and generate millions in future tax revenues for the county. — Submitted photo

Drew Vielbig, a project developer for Ranger Power, provided an update on the company’s “Freshwater Solar” project for Day Township. The project is expected to be completed in 2022.

According to Vielbig, the company is committed to utilizing a “community-first” approach in working with multiple private property owners to secure leases for its 2,000-acre solar farm.

“One of the reasons why we’ve been successful throughout the Midwest is using a community-first approach,” he said. “We really pride ourselves in being active members in the community, being on the ground early and often to work with landowners on the project, meeting with neighbors and government officials. We want to provide as much information as we can.”

Vielbig said about 70 miles east of Montcalm County, the company is working on the “Assembly Solar” project in Shiawassee County and, once completed, it will be the largest active solar project in the Midwest.

“We have already created a few hundred construction jobs associated with the project so we are already seeing a lot of positive benefits that this project is able to generate,” he said.

While Michigan is often cloudy and it may not appear that solar energy is a reliable option for energy in the state, Vielberg said a combination of high retail rates of electricity and lower costs of generating solar power compared to other forms of energy leave it as a reasonable option to pursue. 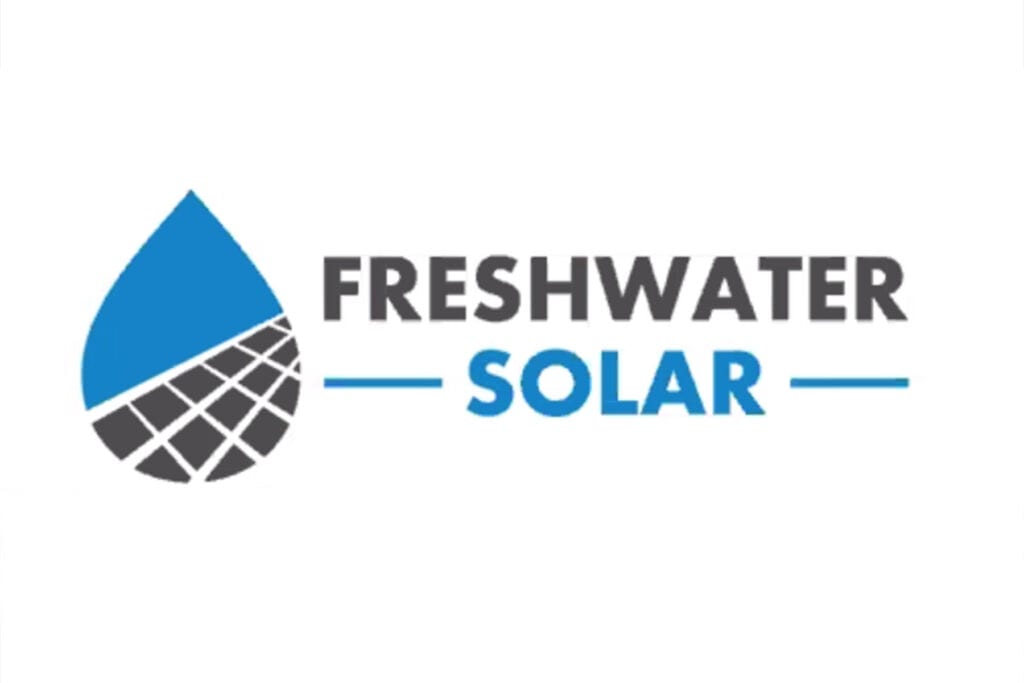 The “Freshwater Solar” project is a proposed 200-megawatt commercial solar farm by Ranger Power in Brooklyn, New York, for Day Township. The $200 million project is expected to be completed in 2022— Submitted illustration

“Naturally, this clean power demand has to be supplemented from new energy sources and solar energy being a cheap form of electricity is slated well to help with this demand,” he said.

With that in mind, Vielberg said attention was drawn to Montcalm County due to its flat, dry, open farmland.

“We also look for areas with existing electrical infrastructure,” he said. “We look for areas that are free of environmental sensitivity, such as wetlands or endangered species.

“Also, Freshwater Solar will be located about 50 miles north of Grand Rapids, which is the nearest large-load center of energy.”

Additionally, once the solar project has completed its lifespan, Vielberg said the property can be returned to its natural state.

“It’s being designed without the need for concrete, which allows for quicker and cheaper construction. This also ensures the land can be restored to current agricultural use once it is removed. The farmland you see in the county today will still be farmland in the future,” he said. “Steel footings are driven into the ground and solar panels are mounted onto single-axis trackers, which allow the panels to rotate throughout the day with the sun in order to absorb more electricity. These solar projects create no greenhouse gas emissions when generating power — no air or water emissions — and over time they help to increase soil and water quality.” 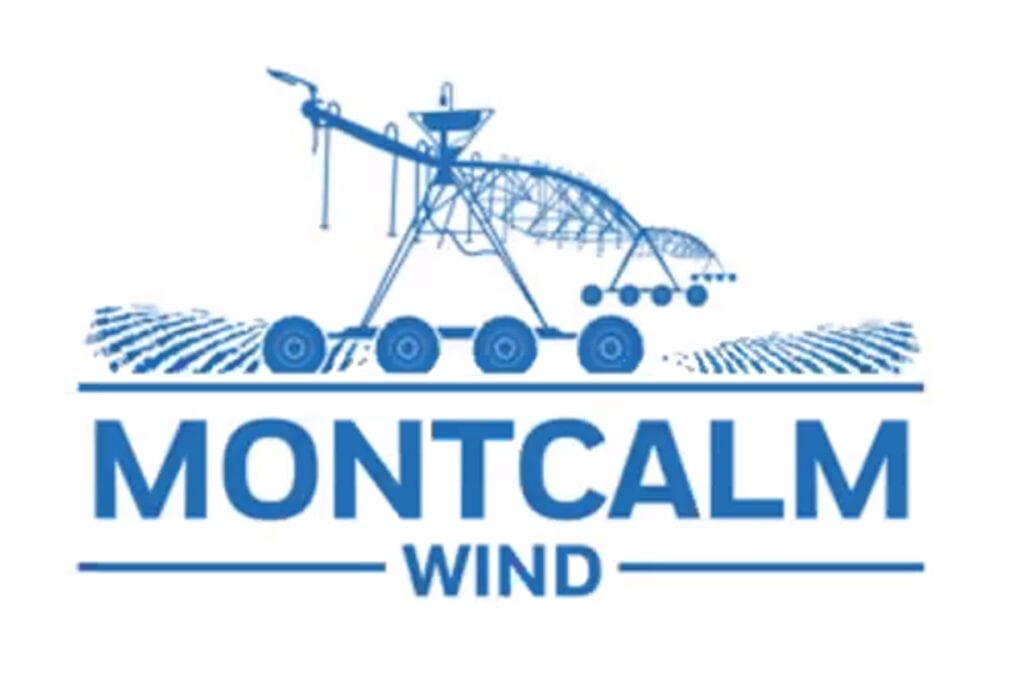 Albert Jongewaard, a development manager with Apex, presented an update on the company’s next wind farm project — “Montcalm Wind.”

The “Montcalm Wind” project is a proposed 375-megawatt commercial wind turbine farm by Apex Clean Energy in Charlottesville, Virginia, to be constructed throughout 11 townships in Montcalm County. The $600 million project is expected to be completed in late 2023. — Submitted illustration

Montcalm County is not unfamiliar territory to Apex, as it is currently wrapping up a large-scale wind turbine project in neighboring Isabella County. That project consists of 136 GE-127 2.82 MW wind turbines spread out over 55,000 acres under lease, working together to generate 385 MW — enough to power nearly 97,000 homes.

According to Jongewaard, the Montcalm County project will be quite similar, only slightly smaller in scale at 375 MW of total power.

“There’s a transition taking place, it’s kind of a revolution in the way we as a nation produce and consume electricity,” Jongewaard said. “I don’t think we are saying wind and solar are the only options, but they are definitely part of the future.”

Jongewaard noted that Montcalm County is a unique challenge for Apex.

“When we looked at Montcalm County as a whole for a potential wind project, we realized pretty quickly that the land use out here, there’s a real sandy soil and a lot of the farmers have pivot irrigation systems,” he said. “It’s kind of the universal trait among the farm country in Montcalm County — but it doesn’t exist in all other areas and wind turbines are kind of a natural obstruction. So that’s something we needed to embrace, to make as part of our identity for the project and we have designed this whole project to really accommodate the land use in Montcalm County.”

Apex incorporated the pivot system into its logo, expressing a desire and commitment to bring wind energy to Montcalm County despite the obstruction.

“We’re interested in the open farm ground with access to high-voltage transmission lines, and really, we can’t do our job without buy-in from the community,” Jongewaard said. “What we’re proposing, it actually works very nice with the work that Ranger Power is also doing in the county.”

With a population of about 63,000, Jongewaard said some of the power generated will stay within Montcalm County, but some also will be dispersed to other areas of the state as the project is expected to generate enough power for 90,000 homes.

Thus far, the project is in the earliest stages, with a proposed completion date of “late 2023.”

To start, Apex has installed three temporary meteorological towers in the county to measure wind speeds and direction, with a goal to install another four before year’s end to continue studying the wind.

Those towers will help give the company a better idea of where the future turbines would be best located. Presently, Apex is focusing its attention in the northern part of the county.

“We’re currently looking at about 11 different townships in Montcalm County,” he said. “We don’t know who’s going to be interested in signing a lease or who’s not. There’s likely to be upwards of 50,000 acres signed into this project and probably several hundred landowners and their families will be participating.

“We’re still a couple years out,” he noted. “There’s a pretty lengthy permitting process we have to go through at the township level, the state level and the federal level. A lot of the townships in Montcalm County are independently zoned so we are working with those to look at zoning ordinances.”

Additionally, Jongewaard said the company has hired third-party help to perform environmental studies on the land.

“We need to understand the lay of the land in any project area that we work in,” he said. “That means studying wetland impacts and also animal habitat use — eagles nests, raptor (birds of prey) nests, migratory birds, bat habitats — so we have kicked off environmental habitat studies with third-party biologists doing bird counts and identifying eagle and raptor nests that haven’t already been identified.”

To show its commitment to the community, Jongewaard said the company has become a joining member of the MEA and is looking to continue donating to various community organizations — which have already included thus far Lakeview Community Schools, Montcalm County Fairgrounds, United Way, Sheridan Community and Spectrum Health Kelsey hospitals, and various area food pantries.

“We are looking forward to continuing working together and growing in the community,” he said. “Much like Ranger Power, we put the community front and center with the work that we do.”