Do wind farms pay taxes? Yes, they do, and a significant amount. The taxation system, however, is very complex and has been in the news lately. Here is some background on wind farm taxes in case it comes up in your community:

For several years, there has been a debate in Michigan around how wind turbines should be taxed—specifically,
how quickly their value should depreciate over time. This first became a problem in 2011 and later in 2014, when
the Michigan State Tax Commission changed the taxation structure for turbines (and associated electrical components), accelerating the depreciation schedule and reducing the long-term value of all the turbines constructed in the state prior to this change. This does not mean that turbines do not pay taxes to a local community—they do. They still pay significant taxes, but not as much over the life of a project as they would have prior to the change in 2014. (see chart showing the different depreciation tables that have been used since 2011 and how quickly turbines depreciate to 30% of value). 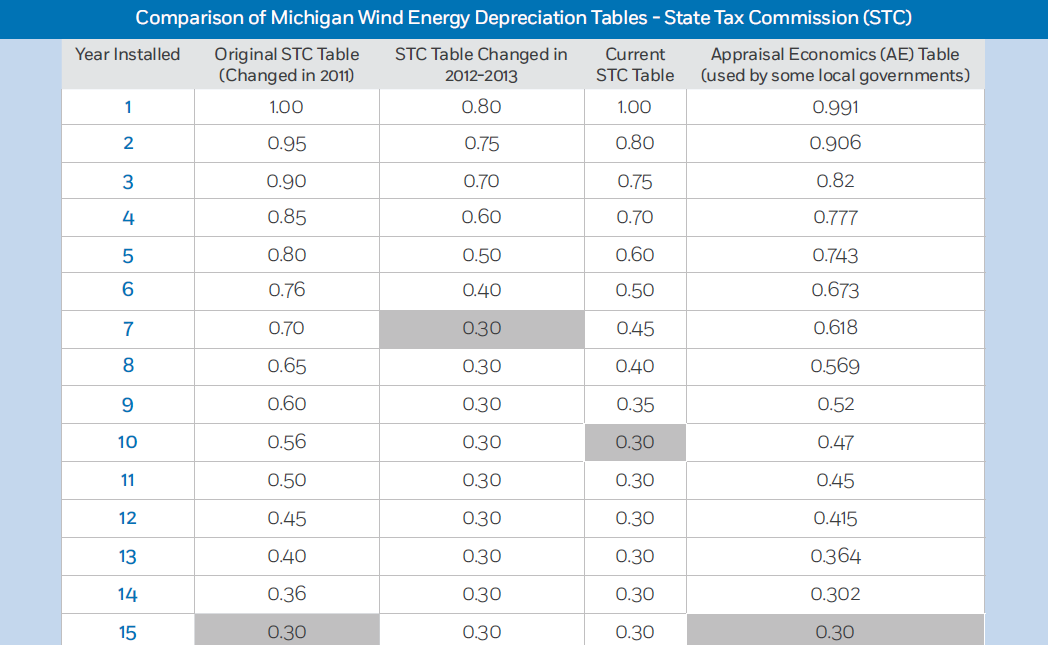 We believe it is important to be transparent about how these taxes are calculated, and to be conservative with our estimates when discussing the local tax benefits of a wind energy project. All of our estimates are based on the current STC tables (column 4 in the table to your right) and local millage rates. If those tables or the tax rates change, they could be higher or lower.

The debate we are seeing in Gratiot County and elsewhere is over whether to use the STC table or the “AE Table” used by some (but not all) local communities hosting wind farms (column 5 in the table to your right). Per regulations imposed by the state’s Public Service Commission, the utilities are obligated to use the STC table, while many communities in the Thumb and Gratiot County prefer the AE table.

Under current law, wind turbines and foundations are taxed as Industrial Personal Property, while the collection lines, substations, and transmission lines are taxed as Utility Personal Property. These two types of property have different depreciation schedules from the state, but both result in a new tax base for local governments.

As an example, we sometimes talk about the amount of taxes generated by a single turbine on a per-mill basis.

Once county, local school debt, and township millages are factored in, most Montcalm County communities have between 21 and 25 mills being levied on personal property.

That means an aver-age turbine in Montcalm County would pay between $400,000 and $500,000 in taxes over its lifetime, which would total $30 million to $40 million for a 75-tur-bine project as a whole. Again, this is using the current STC table (column 4) and does not include the taxable value of underground collection lines, sub-station, or other components taxed at the higher utility personal property rate.
The bottom line is that wind farms pay millions of dollars in local property taxes over their lifetimes, regardless of which table is used. The tax appeals being heard at the state level amount to only a portion of the total tax revenue collected from these early projects.

Click here to learn more about the revenue Gratiot County has realized from wind development, which has totaled more than $50 million since 2012.

Montcalm Wind will generate tens of millions of dollars in new tax revenue for local governments, signiﬁcant invest-ment through construction spending, and annual rent payments to participating landowners. In total, the project represents one of the largest economic development opportunities the county has seen, and unlike many other types of development, Montcalm Wind will not request or require tax abatements.

Where do the tax dollars from a wind turbine in Montcalm County go?