GREENVILLE, MI – According to an economic impact analysis released to members of the Montcalm Economic Alliance on Wednesday, Apex Clean Energy’s proposed Montcalm Wind project will provide a significant boost to the Montcalm County economy and become the county's single largest taxpayer.

The report was commissioned by the Montcalm Economic Alliance and conducted by the renowned Michigan-based W.E. Upjohn Institute for Employment Research. The report utilized construction, employment, and tax payment data from prior wind projects to calculate the economic effects from the proposed 375-megawatt project. The analysis of an estimated $776 million in private investment over the project’s lifetime included $463 million in construction spending, $115 million in wages and spending for operations, $118 million in rent payments to local farmers and landowners, and $80 million in tax payments to local governments. 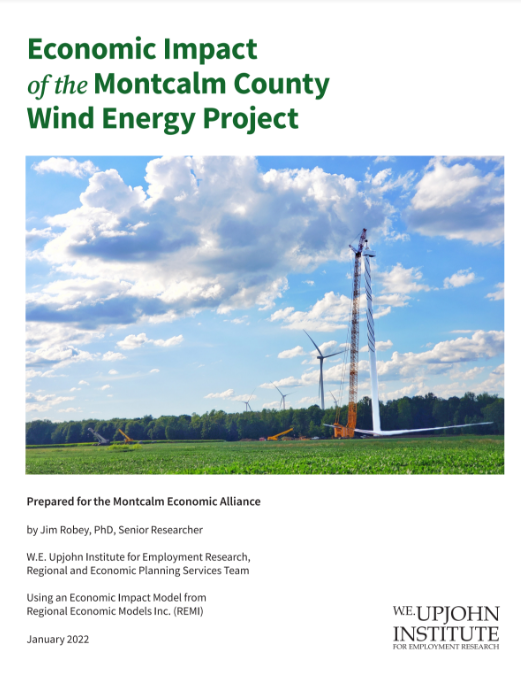 “Using real-world data and evidence-based estimates, this study is one of the most comprehensive examinations of the total economic impact of a potential wind energy project in Michigan,” said Jim Robey of Robey Analytics, lead author of the UpJohn Institute report. “Using the sophisticated REMI model, we’ve estimated that the anticipated $776 million in private investment will generate significant economic activity for Montcalm County – activity that likely would not occur but for these investments.”

“This study shows the significant economic benefits that this development would bring to Montcalm County. However, the Alliance understands that each community needs to make their own decisions on what is best for their respective areas and constituents,” added MEA Executive Director Olivia Blomstrom.

According to the report, the construction of the wind farm is expected to create the equivalent of 876 full-time jobs in and around Montcalm County throughout the year of construction, though some jobs may last longer based on the construction timeline. Local wages and personal income gains from construction could total more than $47 million. Across the State of Michigan, the report estimates Montcalm Wind would support close to 1,800 jobs, including manufacturing, transportation, and supply chain logistics for different components of the project.

“Wind projects have been powering better jobs across Michigan for more than a decade, and with Montcalm Wind we are already taking steps to ensure preference is placed on employing a Michigan-based workforce,” stated Apex Clean Energy Senior Development Manager Albert Jongewaard. “From electricians and heavy equipment operators to concrete producers and Michigan-based manufacturers that may build wind turbine components just a couple hours away, projects like Montcalm Wind create hundreds of good paying jobs and pathways for long-term renewable energy careers.”

The Upjohn report estimates long-term economic impacts from post-construction operations and maintenance. The project is projected to create 15 long-term operations jobs with over $53 million in wages and personal income generated over 30 years, averaging about $1.7 million per year.

Benefits to local farmers, landowners, and neighboring homeowners are also accounted for in the report. With more than 400 families expected to participate in the project, land rent and other payments to members of the community are anticipated to total roughly $4 million per year, or $118 million over the project’s thirty-year lifetime. Previous research from the University of Michigan has found that farmers participating in wind projects were more likely to have a succession plan in place and invested twice as much money in their farms as those without wind turbines on their property (“Farming the Wind: The Impact of Wind Energy on Farming,” Sarah Mills, University of Michigan, 2015).

“I’ve farmed my land for sixty years and my son is the fourth-generation farming, but it’s hard to make a living at farming right now,” said Larry Nielsen of Nielsen Dairy Farm in Pine Township. “From potash to fuel, costs and expenses are unreal. Crop prices may go up or down, but the wind turbines will provide stable income regardless of what happens with the weather. People who work in factories have their 401ks, but for farmers, our land is our 401k. If we sell it, it’s gone. If you rent it or lease it, you still own it. As a landowner wind is a no-brainer, but more importantly the wind project will benefit everybody in Montcalm County, not just the landowners.”

Increased local spending as a result of higher farm income is expected to create 12 additional jobs and have a local multiplier effect that will generate a total of $175 million in new personal income for Montcalm County residents and workers.

Local governments would also see a ‘windfall’ of new tax revenue from hosting a local wind farm. According to the report, a 375-megawatt project like Montcalm Wind would generate about $80 million in new local tax revenue over its lifetime, with about half that total coming during the project’s first 10 years of operation.

Rural Montcalm County townships are expected to see a substantial increase in their tax base and overall tax revenue as a result of the project. Montcalm Wind would become the single largest taxpayer in any township hosting wind turbines, with a higher taxable value than any existing residential, commercial, industrial, or agricultural business or property owner. As a result, township governments are expected to see $5.6 million in new tax revenue from a wind project of this size.

About half of the tax revenue generated by the project would support education-related millages. The Montcalm Intermediate School District (ISD) would receive $14.5 million to support their general, special education, and vocational education millages. 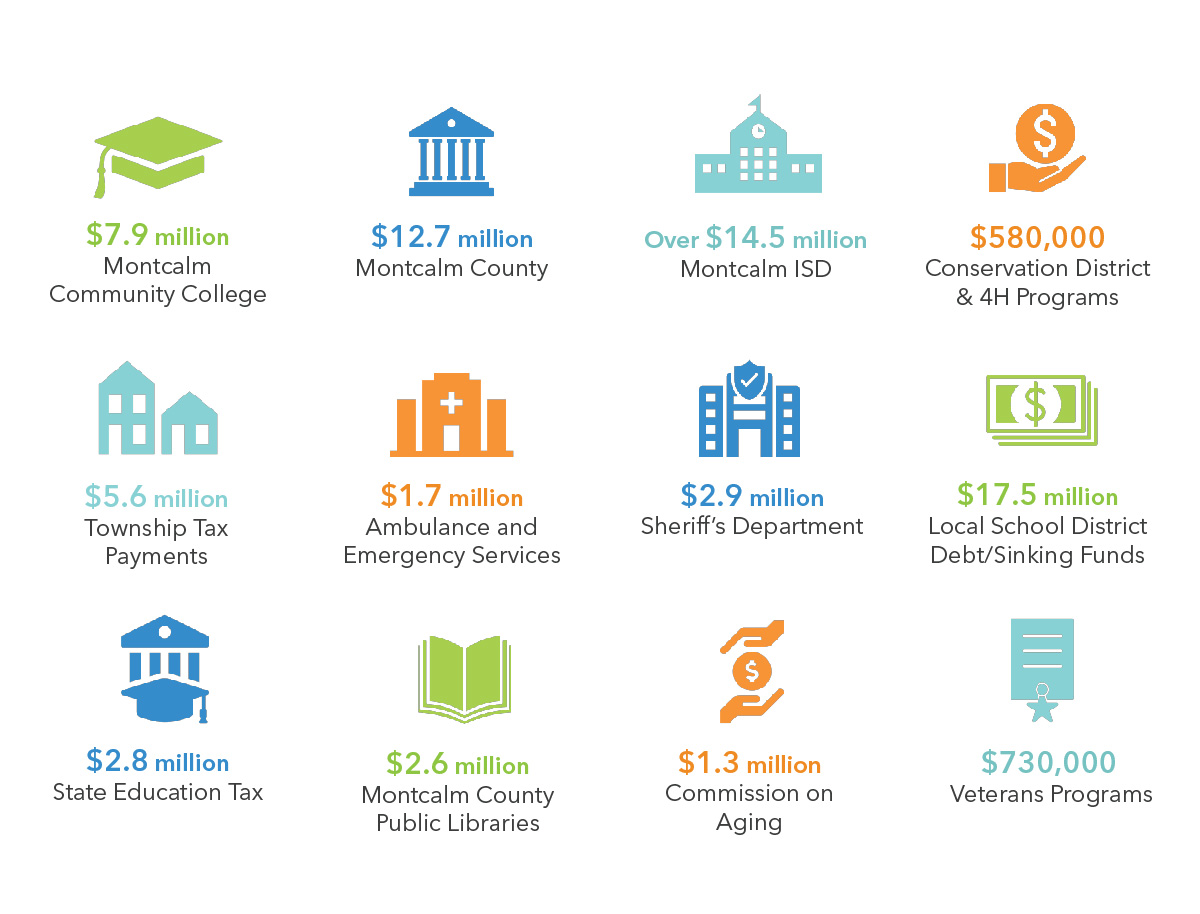 The project will also pay an estimated $8.6 million in school operating taxes and $2.9 million in state education tax payments on utility personal property such as underground collection lines, transmission lines, and the project substation.

Tax benefits are based on the location of project facilities, meaning the exact placement of wind turbines and other infrastructure will determine which school districts benefit. The Lakeview Community Schools district covers the largest portion of the proposed project area.

The new revenue is expected to support at least 20 jobs throughout the project’s lifetime due to the ability of local governments to hire staff and undertake infrastructure projects, generating over $68 million in new personal income for the region.

For more information, or to read the entire study, visit www.MontcalmWind.com/economic_impact/.

Download a one-page fact sheet on the study by clicking here.